10 Amazing Uses of Glass in Medicine!

From housing, building reinforcement and aesthetic structures to household appliances and electronics, glass has a wide range of applications, including medicine and biomedical uses. Here is a list of 10 uses of glass in medicine.

It is estimated 75% of adults use corrective lenses and about 64% use eyeglasses, in the US alone, while, according to the College of Optometrists, an increasing number of Britons also have eye conditions that require eyeglasses to bring their eyesight to optimal levels. So, it goes without saying that one of the most popular applications of glass in medicine is in the form of eyeglasses, which come in an impressive variety of styles. The most common type of glass used to improve one’s vision are the bioptic magnification glasses that help correct light rays entering the eyes as a means to correct either nearsightedness (aka Myopia) or farsightedness (aka Hypermetropia).

Other kinds of eyeglasses include sunglasses and yellow tinted gaming glasses.

Often referred to as photographic slides or microscopic glasses, microscope slides are thin, flat pieces of glass used in medical laboratories to hold specimens such as blood samples, excretes or tissues under the microscope to help diagnose disease-causing agents. Most of the times, they are used together with coverslip or cover glasses, which look much like microscopic glasses, only bigger in size. The slides rest on the cover glasses, just over the object that needs to be examined, pressing the solid specimens flat or forcing liquid samples to form a flat layer of even thickness. This is absolutely necessary for people using high-resolution microscopes that have a narrow region of focus.

Borosilicate Glass is a type of glass with boron trioxide and silica. Known for its impressive endurance to thermal shock and with a distinct chemical resistance paired with excellent optical clarity, Borosilicate Glass has many applications in medicine to date. For example, all glassware within a laboratory is mainly made of Borosilicate Glass. That aside, the production of pharmaceutical packaging (i.e. dental cartridges and pre-filled syringes), also known as parenteral drug packaging, uses borosilicate tubing. Finally, Borosilicate Glass encapsulation is used in artificial hip joints, prosthetic eyes and other implantable medical devices, whose applications include but are not limited to psychological sensors, microchip implants for animals, and more.

Among other chemical and biomedical applications, laboratory flasks are often used to produce drugs, as well as in various scientific settings, especially laboratories to prepare medication. To serve varying applications, they come in many different sizes and shapes.

Like the laboratory flasks, laboratory beakers are used in chemical and biomedical laboratories to hold chemical elements and aid in the preparation of new chemicals and drugs. They’re specially designed to help in stirring, mixing and heating up liquid chemical substances in the laboratories. While there’re plastic and metallic beakers, glass beakers are more preferred for their pellucidity.

Beakers with spouts require no lids. When being used however, you would need to cover it with a watch glass, which is often used to prevent contamination or loss of the beaker content. While covered, the spout acts as a vent. And while it’s preferable to use a watch glass, you can do with another, a larger one in an inverted position to cover the one being used to avoid loss of content.

Microspheres are commonly used to reduce symptoms in patients with liver cancer but require hospitalization since they may cause side effects, when not monitored appropriately. They were first developed at Missouri University of Science and Technology. They are radioactive, due to neutron activation in nuclear reactors, and are 1/3 of the human hair in diameter. When in use, the microspheres are inserted into the artery that supplies blood to the tumor using a catheter. Then, the radiation destroys the malignant tumour, causing almost zero damage to the normal tissues.

Other possible applications for the microspheres include treatment of kidney, brain and prostate cancer among others as well as treating rheumatoid arthritis. Life expectancy increases with use.

Teeth braces have habitually been made of metallic wire brackets. But there have been concerns from people who either wish to have a more discreet teeth straightening option or are afraid to have wire brackets and metals inside their mouth. And, when a need arises, someone always comes forward with a solution. Likewise, we now have tooth-coloured orthodontic braces with self-ligating brackets that are made of a polycrystalline (also called multicrystalline) containing high portions of glass fiber.

Glass has another use in dentistry, particularly aesthetic dental restoration. Today, patients have the chance to choose glass fillings and enhance the aesthetics of their mouth without compromising the durability of the filling.

Although we have already mentioned glass used in the form of corrective lenses that help with people’s impaired vision, Google Glass is a category on its own and has alleged applications in healthcare, although still in infancy and already causing great controversy. Google Glass is a set of what appears like ordinary eyeglasses you wear if you have, say, myopia. However, it is, in fact, a hands-free device that can connect to the Net and allow its wearers to have information displayed right before their eyes, through the glass lenses. For the medical world, a new application for the Google Glass device is considered to be the first wearable health record, where doctors can register for the corresponding app and use it to record a surgery or a consultation with a patient (always with the patient’s permission). All information is then stored in the patent’s cloud-based, electronic medical file and can be shared with the patient if he or she so chooses so. And, this is just the tip of the iceberg, as the device’s applications move to the field of interventional radiology and more.

For alternative medicine, cupping therapy is a treatment to help treat deep scar tissue, pain, swelling, and muscle knots. To perform the therapy, one needs cups of various shapes made of either plastic or, most preferably, glass. It requires low air pressure on the area that is about to be treated and this can be created by heating the cup itself or heating the air inside the cup with an open flame. Through suction, the targeted area is slightly drawn inside the cup. After 5-15 minutes, the glass cup is withdrawn, leaving the patient feeling less pain, if at all. However, the efficacy of the therapy is still unproven in the western world, although it is widely accepted as we move east.

Bioactive glass is manufactured to fit the needs of various medical applications, such as tissue engineering and bone grafting. It is a synthetic material that’s biologically compatible with tissues and consists of high-purity sodium, silicates, phosphates, and calcium oxides in varying amounts. This specialised glass is used to coat surfaces in some types of medical and dental implants to repair periodontal defects or cranial injuries and manufacture hemostatic devices to help control blood loss, among many others. 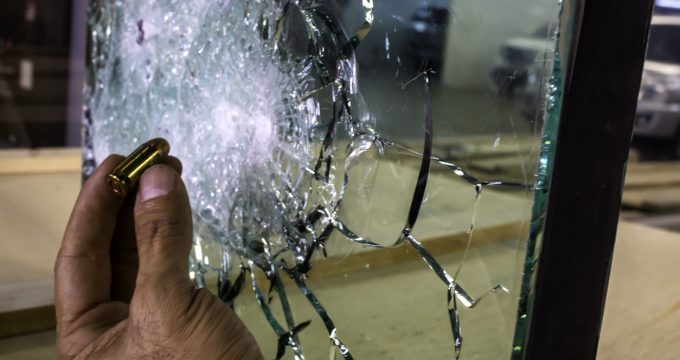 How is Bulletproof Glass Made?

Glass is a wondrous material and, to many of us, a bit of a riddle. It is very easy to…

10 Amazing Uses of Glass in Medicine!

From housing, building reinforcement and aesthetic structures to household appliances and electronics, glass has a wide range of applications, including…

Fascinating Glass Art from Around the World

Art is the silent language of the soul when it cannot express itself through the other channels of formal communication.…

Long before window glass became flat, it was a huge bubble at the end of the glassblower’s pipe, who had…

How is a Windshield Replaced?

Without a doubt, the windshield is the primary safety restraint in a car. So, replacing it is a task that…